London firefighters used a new glue like liquid to save a school in Twickenham from burning down and they are the first crews in Europe to use this unique scientific breakthrough.

In July, crews were called to a fire at a school in Hampton Road in Twickenham and the specialist glutinous gear called PVStop prevented serious damage to the roof of the building by preventing the fire spreading to the solar panels.

PVStop is a black liquid coating designed to cover solar panels, like a liquid tarpaulin, which is sprayed onto the panel using an extinguisher or from the head of an aerial appliance.

The Brigade became the first fire service in the world to join a trial of the light-blocking coating last year and it was used at the incident for the first time last week when they deployed the liquid onto the building’s solar panels.

Operational Policy Watch Manager George Mahoney said: “The fire started in an extractor fan on the ground floor and spread into the void of the roof, where the school had solar panels. Without crews quickly applying PVStop, the fire could have very quickly spread to the solar panels which in turn could have compromised the roof of the school.

“Incidents involving solar panels can be especially dangerous as it’s difficult to isolate the electrical current they generate if they are damaged or involved in a fire and PVStop works by blocking the sunlight which powers them so the process of converting light into electricity is stopped.

“Science and quick thinking of firefighters really saved this school”

“The panels are then de-energised and the risk of electrocution is greatly reduced so crews can get closer and prevent fire spreading from a roof to the rest of the building. 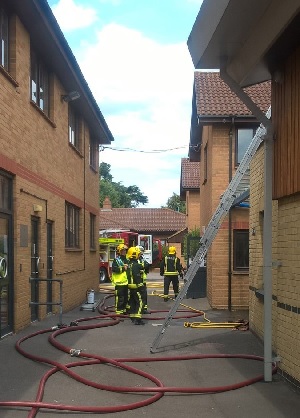 ”A combination of science and the quick thinking of firefighters really saved this school from significant damage.”

Part of the ground floor toilet area in the two-storey school building and part of the roof were damaged by the fire, but damage to the solar panels was prevented by the use of the liquid.

The liquid, which is environmentally friendly and non-toxic, has been distributed to eleven of the Brigade’s aerial appliances.

Operational Policy Watch Manager George Mahoney continued: “This is the first time PVStop has been used operationally in Europe. It has been used once in Australia, where it is manufactured.

“It was great to see this in action for the first time and it was successful – it prevented the fire spreading and has saved the school the cost of having to replace the solar panels.

“We had spoken to crews about PVStop just this week as with the heatwave we had been expecting it.”

The Brigade was called to the fire at 1308 on Thursday (19 July) and the fire was under control at 1528. Four fire engines and around 25 firefighters from Twickenham, Southall and Richmond fire stations attended the scene.

Around 40 pupils and 15 members of staff left the building before the Brigade arrived. There were no reports of any injuries.

The Brigade’s Fire Investigators believe the cause of the fire was an electrical fault in an extractor fan.